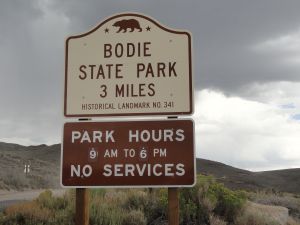 Everyone knows that Mammoth is the place you going skiing and boarding. It’s the Mammoth of ski mountains but wait did you know the other amazing things that Mammoth and the Eastern Sierras have that in addition to the ” the mountain of all mountains”?

These are 5 amazing sites to see in the Sierras

Devils Post Pile
The Devils Postpile National Monument – established in 1911 – protects the unusual rock formation bearing the same name, Devils Postpile. According to geologists the irregular symmetry composed of columnar basalt which towers 60ft high was formed less than 100,000 years ago. The Devils Postpile, which began as a lake of basaltic lava, flowed freely as a river down the valley until it was blocked by a natural dam composed of glacial moraine. Stopped in its tracks, the basaltic lava which is hotter and flows quicker than other various types of lava, filled up behind the dam as deep as 400ft. http://bit.ly/2tSsjEq

The earthquake fault located in Mammoth Lakes is inaccurately titled as a ‘fault’ instead of a ‘fissure’ due to its inactive parallel movement. This particular fault/fissure constantly cuts through volcanic rock and rhyolite lava flow coming in from Mammoth Mountain; formed by the tectonic stresses in the earth’s crust, this earthquake fault lines up with the Inyo-Mono Craters (a volcanic chain.) The earthquake fault is believed to part of the east/west stretch that is widening the entire Basin and Range region. Running north and south this fissure may eventually begin to fill with magma or fill up with debris. Read the complete story  http://bit.ly/2uOKDB6

Bodie, CA a once glorified mining town now stands deathly quiet off route 270. Started in the late 1800s, William “Waterman” Bodey discovered gold near Bodie Bluff which led to the establishment of the first Bodie mill in 1861. Standing for seventeen long years, the flourishment of this lonely town owes its success to the first mill. Occupied at first by a mere twenty miners the town suddenly amplified to a population of 10,000 by 1880. Though multiple families did reside in this once desolate town, prostitutes, gunfighters, and robbers made up the vast majority of the population. Ran predominantly by the Red Light District, multiple brothels, houses of ill repute, gambling halls and opium dens were scattered alongside 65 saloons. Every night miners would head to the Red Light District to blow their daily earnings on drugs, alcohol, and women. Read the complete story  http://bit.ly/2udMmMT

MANZANAR
The memory of WWII slips through your mind like a ghost, Pearl Harbor on the tip of your tongue as you bend over your school textbook, your teacher a lower level historian throwing small facts about the totaled number of Japanese Americans incarcerated throughout the 10 major internment camps in the United States.Everyone knows the story of Manzanar.
Executive Order 9066 was set into motion on February 19th, 1942 by President Roosevelt, following the bombing that sent America into a wave of cataclysmic fear. Henry Stimson – the secretary of war – was given authority to take “whatever reasonable action the secretary deemed necessary.” Evacuating any and all Japanese Americans – despite their legality – from Washington to California, Stimson set up what the government referred to as War Relocation Centers. We call them concentration camps. Read the complete story http://bit.ly/2vgH9Z1

The reserve was established to preserve the spectacular “tufa towers,” calcium-carbonate spires and knobs formed by the interaction of freshwater springs and alkaline lake water. It also protects the lake surface itself as well as the wetlands and other sensitive habitats for the 1 – 2 million birds that feed and rest at Mono Lake each year.Mono Lake is a majestic body of water covering about 65 square miles. It is an ancient lake, over 1 million years old — one of the oldest lakes in North America. It has no outlet.Throughout its long existence, salts and minerals have washed into the lake from Eastern Sierra streams. Freshwater evaporating from the lake each year has left the salts and minerals behind so that the lake is now about 2 1/2 times as salty as the ocean and very alkaline.
Location/Directions
Highway 395, 13 miles east of Yosemite National Park, near the town of Lee Vining, California.